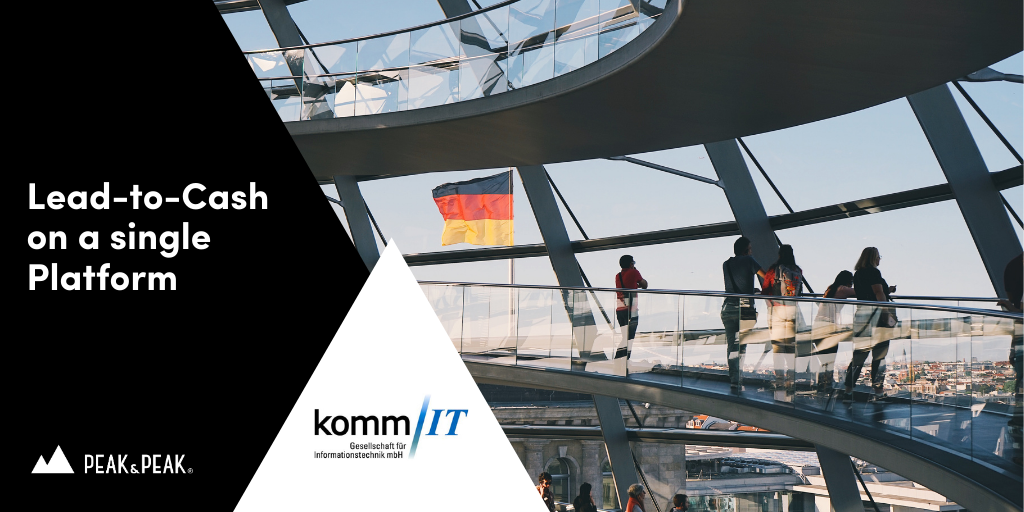 June 1, 2021
Client Stories
⟶
Digitization is one of the most important issues of our time, and the ongoing pandemic is causing even the last doubters to rethink this. AKDB and the associated kommIT have been working on this rethinking for some time now, especially in an area that is not exactly known for change: municipalities and public services. In order to be able to cope with this job better, kommIT has been relying on the market leader in the digitalization of business processes since the beginning of 2020: salesforce.com. Together with the technology consultancy Peak & Peak, digitalization is now also being promoted in-house.

For more than 20 years, kommIT, as a direct subsidiary of the software provider AKDB, has been responsible for the distribution and implementation of digitization projects of municipal services in the Republic of Germany. The Cologne-based company is the one-stop shop for municipalities at eye level. The history of the company alone testifies to its success in the market: from the idea of founding a sales company with only a few people at the beginning, a company with numerous employees and a solid customer base throughout Germany has grown purely organically after 20 years. This growth now had to be poured into solid and at the same time expandable structures and prepared for the coming years.

In concrete terms, there were challenges in all areas. Due to the lack of a central system and data available only in silos, there was neither a uniform view of the customers nor clear transparency within the company. This situation was further complicated by the confusing market situation and a large number of customers, some of whom had complex structures. In addition, an enormously complex and also changing product catalogue caused additional work both in administration and in daily business. The result was that all areas of the company were not designed for the high speed of the market and therefore a lot of potential was lost.

During the decision-making process several suppliers presented their solution. The team consisting of Peak & Peak and Salesforce was convincing in many ways from the very beginning. In several workshops, kommIT's requirements were recorded and formed into a common goal, which was ultimately underpinned by a project plan. There was a good agreement between the three parties, both in human and functional terms, which led to a joint project and the resulting combination of technology consulting at eye level and market-leading cloud technology. The basis of the future infrastructure and business strategy is therefore a solid cloud framework based on the Salesforce Sales Cloud, which has been extended with additional modules and add-ons on the Salesforce platform such as the marketing automation tool Pardot, the offer configuration solution CPQ and the application JustOn for invoicing. All these solutions have in common that they are based on the innovative Salesforce technology and bring innovation to the company in addition to a high degree of security and accessibility. From now on, kommIT will benefit from three free Salesforce updates per year. Anything that is not covered by standard modules and the continuous innovation of the solution can be developed and added individually.

In addition to the change management within the company, the sheer range of solutions to be developed also posed a particular challenge which had to be mastered in the project. In order to map the process from marketing to sales to invoicing, the Peak & Peak team had agile software development according to SCRUM at the ready as an answer. The modern project management approach is based on an agile catalogue of requirements, the so-called backlog, which is constantly being rethought and revised during the process. Thus the project team defines the goal and the direction of the project, but still leaves room for solution design and fine tuning in the process. This happens within several iterations (releases) which together lead to the desired software.

The foundation of this methodology is a strong team, which implements open requirements from the backlog in close consultation and in a two-week rhythm (the so-called sprints). To live this methodology correctly is a decisive factor for the success of such a project and was accepted excellently, not least due to the previous experience on the side of kommIT's project manager Stefan Georg Müller with regard to SCRUM and the openness of the colleagues around him.

Implementation of the Lead-to-Cash process

Based on the requirement to implement the process from marketing to invoicing, the project was divided into four releases. On the one hand, the subdivision served to be able to profit more quickly from the solution and, on the other hand, to streamline the internal change process:

In addition to Stefan Georg Müller from kommIT and Robert Höck from Peak & Peak, who were permanently involved as overall project managers, the team around them was expanded and adapted to the existing requirements in the respective releases.

The permanent involvement of future users already in the development process, as the SCRUM methodology provides for in so-called user acceptance tests, was certainly nerve-racking at some points, but ultimately led to quality and acceptance. Continuous testing was ultimately decisive in satisfactorily mapping the special challenge of the AKDB product catalogue.

With the release of the last features and functions in the area of invoicing, the entire project came to a satisfactory end in November. From now on, the company's employees will benefit from a 360-degree view of the customers and will thus be able to better assert themselves in the market.

Even though the initial implementation project has come to a successful end with the last release and happy users, the journey is far from over. In addition to the constant expansion of the solution by the team of kommIT and Peak & Peak, with Peak & Peak taking on the role of technological sparring partner, there is still a lot ahead of kommIT and its employees thanks to the innovative power of Salesforce. Salesforce's customer and partner portals based on the CRM could be of particular interest, for example, in order to link partners and customers more closely with the company. Also interesting and within reach thanks to the preparatory work is the use of Salesforce's own developed business intelligence and artificial intelligence to make sales more efficient and successful. The possibilities with such a flexibly expandable platform as Salesforce seem almost limitless and, in addition to the added value they bring to kommIT, are above all one thing: a guarantee for a strong future. Together, the trio of kommIT, Peak & Peak and Salesforce is therefore well equipped for what is to come.

Let's connect and start building a lasting partnership.
Click to contact us
⧉
Give us a call
+49 (0) 621 668 889 20
Thank you. We received your request and will be in touch shortly.
Something went wrong while submitting the form. Please try again.

Stay updated about the new technologies, processes, and latest insights from our company.
Thank you! Your submission has been received!
Oops! Something went wrong while submitting the form.